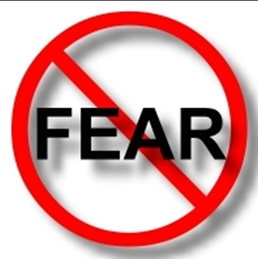 Have you ever heard someone say that they just can’t do “it” (whatever “it” is) because they’re being held back by “fear of success”?

Let’s face it – fear of failure is a thing; fear of proving you can’t do something is a thing; even fear of becoming successful and then losing it is a thing. But “fear of success”? Can I just be perfectly blunt about that?  There ain’t no such puppy.

Who’s afraid of success, really? Think about it. If you’re truly afraid of succeeding, then what’s the point of even trying? You might succeed. And that would scare you.

No, the fact is that people might be afraid of a couple of things connected with success – but not success itself.

Thing #1: Some people are afraid to try that thing they’d really love to try because – what if they can’t? That would be the end of the fantasy that “I could if I really wanted to – I just don’t want to. But I could . . .” We’ve all had those fantasies. And so we don’t try that thing because we don’t want to prove to ourselves (and everybody else) that we really are not capable of doing it.  Entering that contest, starting that diet, trying out for that team . .

Actually, I see this type of thing with students all the time. “I can’t write,” “I can’t do math,” and – everybody’s favorite – “I can’t give that speech!” (meaning “if you make me, I won’t just fail, I’ll die”).  So because they believe they can’t, they simply won’t – and they’ll fight you not to have to try.

Is it okay to mention that trying won’t kill you?

Sure, you might be embarrassed – who hasn’t been? But what will kill you in the end is regret – regret that you never did try.

Thing #2: Some people are afraid of achieving success – and then losing it.

That’s not fear of success, that’s fear of losing success. But it’s truly true what they say: “You win some and you lose some.” And sometimes you win some and then lose. It happens. Don’t let the fear of it hold you back.

Thing #3: Fear of imperfection. That’s right. What if you can’t do “it” perfectly the first time you try?? OMG!

Seriously, some people get stuck on this. Again – I have students who will try once (if they try at all) and if it doesn’t work perfectly, game over. Period.

I used to have this problem and sometimes still do. But I didn’t realize it for the longest time until I had a student who would pitch a royal fit, swearing and throwing things, if he couldn’t do something flawlessly the very first time he tried it. And in the middle of his rant, he would yell, “I’m so stupid, stupid, stupid!!!”

That’s the day I realized why I got so upset when I couldn’t do something perfectly the first time: I felt really stupid; I felt as though there was something actually wrong with me.  I personalized my failure instead of simply chalking it up to “just not my thing; I guess I’ll have to work at this one.”

Frequently, I have students who hate to write because they find it hard and so they have this mistaken idea that if they were any good at it, it would be easy. So I get out my notebooks and show them how much writing and re­-writing I have to do before I get a story or an article right. It’s true. Writers write – and re-write. Musicians practice and then practice some more (except for Beethoven – he never practiced). Athletes work up to that 500lb weight or that four-minute mile or that 200th pull-up. No one ever starts out doing “it” perfectly. And that’s okay.

The bottom line is this: before you can achieve your dreams and fulfill your destiny, you have to face your fears. And before you can face those fears, you have to identify what they really are. If nothing else, remember this: your failures are not a reflection of who you are. They’re simply an indication of what you need to work harder at doing. That’s all. And if anyone ever tells you anything different, just tell them they need more work on their social skills.

The only real failure is never trying.