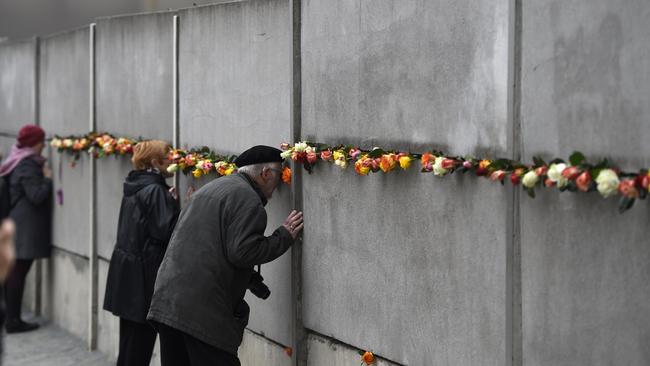 When I was growing up, our Air Force family was stationed in Germany. During those years, my mother and father took us on trips all over Germany and so we were able to visit many breathtaking places: the Rhine River Valley, the Salzburg salt mines, Mad King Ludwig’s castle, the beautiful Black Forest region, and even the Austrian Alps. However, the two places I’ll never forget were the German concentration camp at Dachau and communist-ruled East Berlin. The sights, sounds and smells of those places are burned forever into my memory.

Dachau. My family and I walked along a dirt path bordered by an uneven line of white-painted rocks corralling patches of red posies and brownish-green grass. “Keep Off the Grass” warnings were posted in German and English. The path led to a large, white, one-story building with a black hole for an entrance. Tentatively, we stepped inside the iron doorway into a large room, perhaps 25’ by 40’, lit by a single light bulb. A horrible odor like rotten meat assaulted my nose and I gagged. As my eyes adjusted to the dim light, I saw – nothing. The room was completely empty except for a row of drains set into the cement floor and dozens of spigots pointed downward from the ceiling. Wondering what this place was, I noticed a sign on the wall. Thirty seconds later, I knew that I was standing in a Nazi gas chamber where, during WWII, Jewish people had been herded and locked into this room and then stripped naked while gas poured out of the ceiling, choking, suffocating, and ultimately, poisoning them to death.

East Berlin. My family took a tour bus to the communist side of Berlin. The Berlin Wall separated East Berlin from West Berlin so to pass from one side of the city to the other, we had to stop at the guard stations known as “Check Point Charlie”. This guard station was manned by East German soldiers armed with very large machine guns and snarling guard dogs.

Once outside the bus, we were struck by the contrast between communist-controlled East Berlin and democratic West Berlin; it was like walking from a color picture into a colorless photograph. Literally, everywhere, everything was black and brown and gray. Buildings destroyed during WWII still sat in great, bombed-out heaps of dark brick and black ash. Few people– all clad in gray or black – walked the streets and those who had ventured out kept their mouths closed and their heads down.

No one dared to smile.

My father, in Air Force uniform (because he was off base), approached an old woman to ask a question. I remember her ancient her coat on that cold, gray day – shabby and brown, with frayed sleeves. My father asked her, in German, if the building across the street had been destroyed during the war. The woman refused to look at my father. Mumbling something about not knowing what war he was talking about, she hurried away.

As our bus prepared to leave East Berlin, we again had to stop at Check Point Charlie. This time, the armed German guards boarded the bus and checked behind each seat, looking for anyone trying to escape East Berlin. They also rolled a large mirror under the bus to check for anyone desperate enough to try to hitch a ride out underneath it.

I tell these stories to make a point. I am passionate about this country. Of course there are those who would tell you that that’s an understatement. I am deeply grateful for so much about our nation, particularly our freedoms: the right to say whatever we want without fear of government reprisal; the right to travel anywhere, anytime; the right to assemble together, to arms ourselves, to worship whomever and however we please; the right to “due process” if arrested and arraigned: a jury trial, the “presumption of innocence” in court, and the prohibition to be tried twice for the same crime.

So many other countries just don’t have these rights!

I teach teenagers and it breaks my heart to see that so many of them have no idea what our rights are and therefore no conception of their rarity in this world or their value. In fact, many students and even adults don’t know even basics facts – the VP’s name, for example. Therefore – and this is the point of this entire post – many, many, people in this country do not have any idea what’s at stake in this election. And these folks are going to vote.

Because of my father’s service and the lack of freedom I’ve witnessed in other countries, I understand that these freedoms must be defended and protected. And the best way to do that is to vote for those who will defend our Constitution.

So what are the candidates for?

Economic Growth: Trump is for lowering taxes for businesses which has, in the past, caused businesses to grow and create more jobs; Clinton will raise taxes on businesses which is what has happened under Obama. That has not worked.

Military Readiness: Trump will expand the military; Clinton will maintain or decrease the military. This readiness speaks to our ability to defend ourselves against terrorism – or not.

Illegal Immigration: Trump will build a wall and can make Mexico pay for it simply by cutting aid to Mexico equal to the cost of the wall. Clinton will not build a wall; she says she will increase border patrols. (That has not worked to date.) Trump is for deportation of criminal illegals and a “path to citizenship” (vs. amnesty) for other illegals; Clinton is for amnesty for all illegals, meaning they receive automatic and immediate citizenship and voting rights.

If Hillary Clinton is for the same policies as Obama – which she is (proven by the fact that he’s campaigning for her), and if those policies are not working now – which they’re not, how can we believe that doing the same thing for the next four years will improve anything in our country?

More importantly, if our Constitution and the Supreme Court are lost with this election, we will not get another chance to save them. We must vote to uphold the Constitution of the greatest country in the world – the United States of America.

I’ve seen the results of more government control in other countries. The only people who really think that’s a good idea are the people running those countries. People escape to this country to get away from countries controlled by governments.

There’s a reason for that. Think about it before you vote.