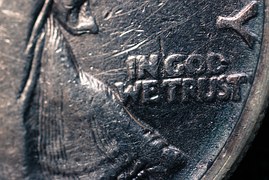 Have you ever asked God to do something and He came back with some very odd instructions for you? For example, you need money and the Lord tells you to give away what you do have? Unusual, right?

Not so much. Twenty years ago next month, the Lord gave us our house. Now, I know what you’re thinking: “Big deal. He gives lots of people houses.” True that. However, if you really understood how impossible it was for us to get a house – ever – you’d realize the miracle that it was. We had no money, bad credit, and my husband’s business was not a money maker. And that wasn’t just a temporary situation – we were poor, and we’d lived in the same apartment in a not-great part of the city for ten years. (Did I mention that I was pregnant – again?) The bottom line is that I was beginning to lose hope that we’d ever get out, much less own a home.

It all started about eight years in when I’d begun trying to save money for a house, scrimping and saving for two long years. Even so, after all that time, I didn’t have much – not in down-payment terms, anyway – maybe $2000 (almost). But then the car had to go and die. So – there went that.

Nevertheless, I began saving again and by my birthday, I had about $100 – gifts from parents, in-laws, etc. At the same time, my church began fund raising for a building extension and guess what the Lord asked me to do? Correct. Give it to the building fund. I pretended I didn’t hear Him for awhile, because, well – then I wouldn’t have any money. And how much sense would that make? It couldn’t be God.

But I knew it was.

Finally, I said, “Okay, I’ll give you half the money.” And I was feeling pretty generous about it, too. But no. The Holy Spirit tapped me on the shoulder and said, “I want all of it.”

What could I say? No? It was the God of all the universe asking.

So I sighed and said, “Okay, I’ll help You build Your house and You help me build mine. Besides, who am I kidding? I need way more cash than I could ever dream of saving. Take it all.”

And the really funny thing was, when I thought about all of the people who might potentially get to heaven because they would have a church to attend, I felt good about it.

Six months later, September 9th, 1996, we moved into a home of our very own. (Long story.) But it gets better: we had two little boys, 1½ and 3½ and they each had a bedroom. Their bedrooms had been painted and decorated before we ever saw the house; one bedroom was pale green with a teddy-bear border and the other was blue with Sesame Street characters on the walls – Big Bird and Cookie Monster. And (drum roll) – there was a deck, a pool, and a big, fenced-in backyard. (Not to mention a new kitchen, new wall-to-wall carpeting and all appliances!) And all of it located in a really good school district.

Remember Naaman, the army captain who had leprosy? He was told to go find the prophet Elisha to be healed; Elisha told him to go and dip in the Jordan River seven times. However, Naaman was insulted because he’d expected Elisha to heal him in some – less unusual – way (2 Kings 5:8-14). Now, you might put that down to “just another crazy Old Testament thing” but probably not. Imagine going to a church service for healing and being told to go dip in the Seneca River (or Mississippi or Rio Grande). Would you? No?

Sometimes God does some pretty peculiar things. And He expects us to go along with them.

Imagine asking two very old folks who could never have children even when they were young to believe they’d be the father and mother of an entire nation. Imagine asking a boy to pick up a slingshot and stone and kill a Philistine giant. Imagine walking around stark naked for three years as an object lesson to the nations of Egypt and Cush. (If you aspire to be a prophet, realize that living a prophetic life is often not fun. Ask Isaiah.) Imagine asking a poor, unmarried, 14-year-old girl to be the mother of the Messiah. Mary’s response?

What strange, bizarre, it-makes-absolutely-no-sense thing is God asking you to do? When the Lord asked Queen Esther to risk her life going before the King without being summoned, Mordecai reminded her, “’If you remain silent at this time, relief and deliverance will arise from another place’” (Esther 4:14). In other words, if you don’t do it, God will find someone who will. Esther’s response? “’If I perish, I perish.’” But notice she didn’t. She did become a heroine. David became king. Abraham and Sarah became parents of an entire nation. Naaman became whole. And Mary became the mother of God.

What could you become?

Previous post
To Quit or Not to Quit? That is the Question.
Next post
The Destiny Killer.