To Finish—or Not to Finish…? 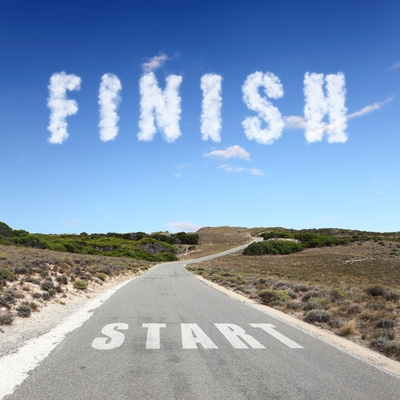 TO FINISH—OR NOT TO FINISH…?

Hailey was a writer. I say was because she wrote but she never quite finished anything she wrote. She’d begun three different books: two were novels and one was a non-fiction book on eating healthy (when you can’t afford “healthy” food). However, if you asked her, she didn’t quit—she just postponed finishing. She would finish when the time was more convenient.

On the road to our destiny, the concept of “someday” is a pothole the size of Montana. Basically, it’s the excuse we give ourselves to procrastinate. And why do we do that? Fear. We’re afraid that either we can’t finish that book or business proposal or degree or—fill-in-the-blank—or we’re afraid that if we do, somehow our work will fail or be rejected. The concept of “just not good enough” haunts our dreams and shipwrecks our destinies. However, there are some things we can do to help us to get unstuck.

REMEMBER WHO IS CHOSEN.

God has this sometimes disturbing habit of choosing those who feel least equipped to do the job. That right there can be a stumbling block to many of us because when we struggle to accomplish that assignment, we feel inadequate and unworthy. Then we convince ourselves that we can never succeed and so we “postpone”. But the truth is, we really quit. We would never admit that because we know that quitting is evil but we never quite get back to it. However, we’re forgetting one thing: God is with us.

Remember Moses? We think of him as the greatest prophet in the Bible—and he was—but the truth is, but when the Lord called him, he was a murderer and a fugitive. But still, God chose him to be the deliverer of Israel. However, what was Moses’ response when God first had that little chat with him? “I can’t. No one would listen to me. And if they did listen, who would believe me? Besides, I can’t speak.” As the story goes, God refuted each of these arguments but Moses was still scared. Finally, he said to God, “’I’ll go if you go with me.’” The Lord’s response? “’I will go with you.’”

God will go with us, too. In fact, he never expects us to do our assignments alone. That’s why he often picks those least likely to succeed; it’s specifically because he wants to partner with us to do that thing he’s assigned to us.

And make no mistake: that’s exactly what it means when God calls us—it’s an “assignment”. It’s not a hobby, it’s not a pastime, it’s not a toy. It’s a destiny for a specific purpose—and that’s to change the world.

DO NOT underestimate your calling, your assignment, your destiny. It’s crucial to the kingdom of God. And what’s more, it’s possible.

WILL IT BE HARD?

Of course it will be hard. There’s always a learning curve and much of what God expects us to do initially after he calls us is to train. That’s right—after he calls us. He doesn’t expect us to perform perfectly from the start. And there’s an encouragement.

When I first began writing fiction, I thought I knew how. Little did I know, I knew almost nothing. The last few years have been a combination of learning and crying. Just when I think I know enough to be good enough, I find out I have something else to learn. Eventually, I’ll know enough and have practiced enough that I’ll be “good enough,” but does that mean I won’t have anything else to learn? Absolutely not. And neither will you. If you’re not confident that you can succeed, educate yourself and practice until you can. But here’s the truth: “Hard” is not, not, NOT an indicator of whether you should be doing that thing. The only thing that is an indicator is whether or not God has called you to do it. Period. The end.

Don’t be scared. Okay, be scared but don’t quit. As Joyce Meyer always says, “’Do it afraid.’” Fear is not a sign that you should quit because since when are emotions a reliable indicator? Nor is fear a good excuse to quit. What’s more, fear is not permission to procrastinate or to postpone your assignment. So the next time you’re tempted to lay down the assignment “for a while,” there might be one thing you’re forgetting.