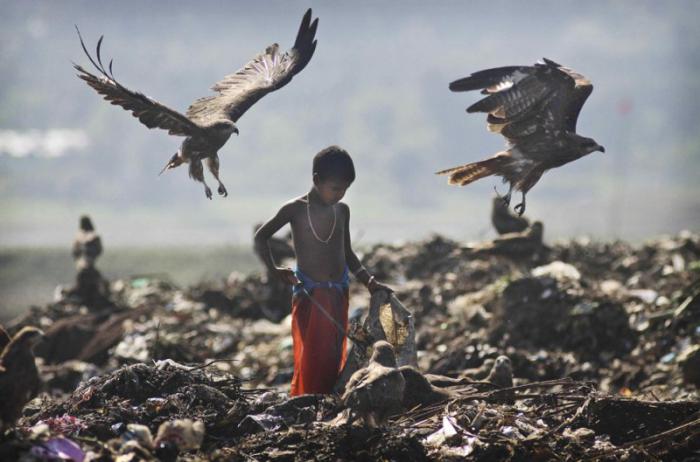 Years ago, I returned to my apartment one Saturday afternoon after yet another extended-family party at a relative’s home. It was bad enough (in my mind) that this particular relative had a house but this was their second house, an upgrade from the first one which had been very nice to begin with. Meanwhile, I was still stuck in the same apartment my husband and I had been in for ten (long) years, living in a very, well—unfortunate—neighborhood. And for various economic/financial reasons, we had few prospects of owning a house anytime soon. Or ever. So you can bet that God got a piece of my mind that day. However, half-way through my rant, God suddenly decided a little conversation was in order.

GOD:  “Look around your living room. How big would you say it was?”

GOD: “Your living room—how big is it?”

GOD: “Do you have any idea how many people in the world would give their right arms for this much space? Do know that in many places in the world, entire extended families live in spaces even smaller than this?”

That was the end of that rant.

That day gave me a whole different perspective on life. It taught me to focus on what I have instead of what I didn’t have. I remember that from that day on, no longer did I mourn not having what my relatives had, but I found myself very grateful that I was not living in a mud hut with nine other people and no heat or bathroom or shower or even running water. Did I mention that I was pregnant at the time? So instead of being angry and resentful that I didn’t have a new house to bring my baby home to, I was grateful that I would be able to bring my child home to a warm, safe home. I was grateful that I would have food for my baby and medical care and diapers and even toys. I couldn’t help thinking, often, about women all over the world who have to watch their children suffer from hunger or thirst or disease. I thought about how, in some places, their children had no clothing or shoes or if they did have them, they might be too small or outgrown altogether. I thought about how their children might have no diapers and no water to bathe. I thought about how their children might not be safe from violence or thievery or even kidnapping. And I thought about the orphans who had no parents to provide even the smallest of these necessities and whose only hope of surviving was to beg in the streets—or worse.

I still think about them.

Last month, I had a series of mishaps and break-downs occur in the house among appliances and other things that needed a tweak here and there. An electrical outlet in the kitchen stopped working and, among a tangle of extension cords, I had to plug appliances into outlets in other places until I could get it fixed. As I began to gripe and complain, it occurred to me that this was a 1st-world problem. At least I have electricity. Then the washing machine (which, granted, is well past its teenaged years), decided that it might take a break from spinning water out of clothes. As I struggled to wring out the laundry by hand, I might’ve muttered some stuff. Then I pictured women in other places hauling their clothes down to a stream somewhere (if there was one) and scrubbing their clothes on a rock. At least I had a washer—and it could be fixed.

Over the years I’ve seen too many students pitching fits that they have to come to school. I try to explain to them that in many countries in the world, education is not free or even available, and people in 3rd-world countries (after I define that for them) have no hope whatsoever of making their futures better for themselves or their children. I try to make students understand that, not only do most children in the world not have cell phones or computers or television, many of them don’t even have food or water or clothing. And my little speech seems to make an impact. For about ten minutes.

As I tell my own sons—there are always going to be those in the world who have more than you have and those who have less than you have. Your happiness, success and destiny will depend entirely on which you choose to focus on.

Who’s got the right perspective?