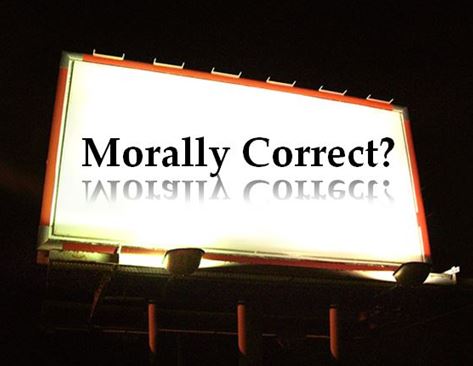 I’m sick of the term “politically correct”. Ever wonder who’s responsible for it or what it even means? I have . . .

The nearest I can figure is that the term originated in some smoke-filled back room with a gaggle of politicians sitting around, waving their cigars, and plotting their re-elections: What’s the safest position to take on an issue like immigration? abortion? Common Core? research funding for cupcakes? (Yep, that’s a thing.) I expect the conversation went something like this:

“What about the work requirement for Public Assistance? Should we vote for it or against it?”

“Well, Henry – my constituents are mostly urban folks. More than 33% of them are on some form of welfare or another. I don’t think I want to rock that boat. I’m voting against.”

“My district is primarily working-class – some farmers, lots of blue collar from the factories. I don’t think it would be politically correct for me to vote for a work requirement for welfare – they work hard for a living, don’t you know? It would tick them all off and I might find myself out of a job next fall.”

(Lots of laughter, another round of whiskey rocks.)

“I like that term, Frank – ‘politically correct’ – where’d you come up with that?”

“I wrote it into a speech last week.”

“But don’t you mean ‘politically safe’?”

“Of course, but we can’t actually say that.”

“You’re too much of a philosopher, Joe!” (Laughter.)

“Cut the boy a break, Danny! He’s only been in Washington for five minutes!” (Even more laughter.) “It really means nothing, Joey. It’s a vague enough term that it could mean anything. Let people use their imaginations – “biased, racist, prejudiced” – no one wants to be associated with any of those. So anything we’re against we’ll just tag ‘politically incorrect’.”

So – what if we are ‘politically incorrect’? Is that a Class A felony? Do we go to jail? Get a hefty fine? Or are we just called ‘mean’ or ‘racist’ or some other scary thing? And if so, who cares? Maybe it’s time to start asking what it really means to be politically correct. I’m no Einstein but my guess is that both ends of the political spectrum believe they’re correct – politically or otherwise. And my further guess is that each side has a different definition of what it means to be ‘correct’ anyway.

But why should we bother asking what it means? Why waste the ink?

Here’s why: If the fear of being ‘politically incorrect’ is getting in the way of doing what we really feel is right to do, then we could be nuking our God-given destinies. If the big, bad bogeyman of being labeled ‘politically incorrect’ is defining what’s right and wrong for us, perhaps we need to consider that our moral compasses should not be based on politics. Just maybe it’s time we take a stand and insist on the morality of an issue and not the politics of it.

Maybe we should just ditch the term ‘Politically Correct’ altogether and go with, say, ‘Morally Correct’.

Or is it politically incorrect to be moral anymore?