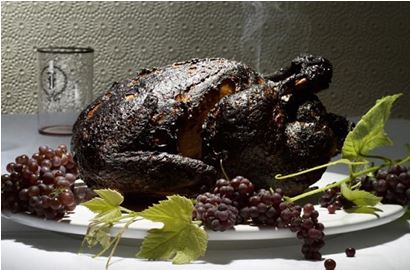 The fried turkey is burning. But – so what? No one’s going to starve. To my knowledge, a bologna sandwich never killed anyone. And so what if the dishes sit in the sink till the sun rises? (Or sets?) Unless you’re expecting a Department of Health inspector to stop by and report to your mother-in-law, what difference does it make?  So what if the lawn doesn’t get mowed every Saturday at noon? The Neighborhood Association can’t evict you for at least a week.

Sometimes we just have to take a break and get a grasp on the big pic before we get so caught up in the silly annoyances of life that we forget what really matters and what doesn’t.

Kids have clothes on. Matters. The clothes are designer brand. Doesn’t matter.

Computer’s down. Doesn’t matter. You have to hand-write a business plan. Now it matters.

Stupid things – all. Even the things that we think “matter” are often just blips on the radar; here and gone. When we’re faced with a flat tire, a snarky boss, or even a moment (or two) of “intense fellowship” with our spouse or child or parent, we need to step back and reflect on a couple of things:

So what if we miss the party? No one’s going to die. As I’ve been known to remind myself in the occasional crisis, no one’s going to go hungry or end up sleeping on a park bench, either. Really.

Certainly there are serious circumstances in life sometimes, and they do require serious attention. They matter.

But let’s save our panic attacks for those – not the small fender dent or the lack of pizza funds or even the not-nice comment from the Mean Girls or the water-cooler crowd.  Let’s step back and take a look at the big screen: We’re not living in some poor, third-world country where we have to walk three miles a day in mirage-degree heat just to get one bucket of dirty water to drink, wash in, and water plants with. That’s if we have plants.

We’re not living in a country where children die from strep throat or mosquito bites or a flu bug because meds don’t exist.

We’re not living in a country where education is a myth or where, at best, it has to be bought and paid for.

We’re not living in a war-shredded country where explosions and blood and death are as common there as video games are here, where children are dying from real bullets, not shooting imaginary ones on a flat-screen.

We’re not living in a dictatorial country where “vote” is an evil word and where a brutal regime can reign for decades. If we end up with a bad president, we’ll get a new one. In Cuba they won’t.

So the washer died and we have to go to the mat to get clean clothes. At least we have clothes. And they’re clean.

So we broke a toe or a window or a fingernail. They can all be fixed.

So half the news is fake. We can turn it off.

Let’s step back and look at the big picture: What will any of it matter in a day? a week? a year?