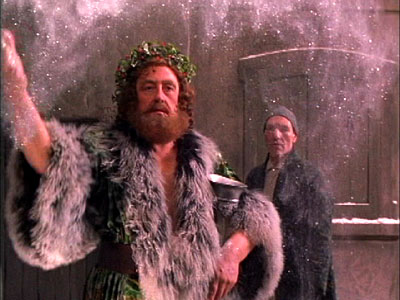 We all know Ebenezer Scrooge. He may not be a filthy rich old man living alone in a cold, dark mansion, but we all know him (or her). It’s the cold, stingy person with a heart the size of a peanut and a bitterness that entombs him like a pall. It’s the person who always has a word of criticism, deserved or otherwise. It’s the person who can always be counted on to prophesy the dark side of any situation. It’s Scrooge—the personification of all that’s wretched and miserable.

Maybe this Ebenezer, like the original, hates Christmas and all it stands for—worship, love, gratitude, and generosity and giving—perhaps that last most of all. This Ebenezer Scrooge hoards his possessions, money, and time as well as any encouragement, mercy and love that might be lurking in some dark corner of his shriveled heart. His only response to invitations to laughter, fellowship or celebration is a scowl and some venomous version of “Humbug!”

We all know Ebenezer Scrooge.

Ol’ Eb is not easy or fun or comfortable to be around and often, despite our attempts to love him—or maybe because of them—he seems to become more angry, more bitter, and more pitiful over time, just like the original Scrooge.

But the story doesn’t end there.

If you’ve never read Dickens’ classic tale of Ebenezer Scrooge, here’s the one-page: Scrooge is visited first by the ghost of his long-dead business partner Jacob Marley who comes to warn him regarding his path in life. Marley is doomed to drag with him forever the “ponderous” chains he’d forged in life—one link for each evil or corrupt deed he’d done—or good deed neglected. Scrooge is confused as to why Marley is being punished since he was such a “’good businessman’”. In response, Marley screams, “’Mankind is my business!’” To prove his point, he shows Scrooge the poor and suffering of the world and laments that he is condemned to walk the earth for all eternity watching them suffer and yet not permitted ever to help.

“’Why did I walk through crowds of fellow-beings with my eyes turned down, and never once raise them to that blessed Star which led the Wise Men to a poor abode…?’”

He warns that the only way Scrooge can be saved from a similar fate is to change his ways and so, to that end, Marley sends three spirits to “haunt” Scrooge that night…

Enter the Ghost of Christmas Past.

This spirit takes Scrooge on a painful tour of his past, exposing some of the reasons for his hatred of Christmas: scenes of the lonely Christmas breaks at boarding school when Ebenezer was the only boy left there for the holiday; a reminder that his beloved sister died around Christmastime; and the scene where his fiancée breaks their engagement at Christmas because she perceives that Scrooge has grown to love profit and money more than herself.  At this scene, Scrooge rages at his younger self to reassure her that she’s wrong but alas, he does not. Scrooge then demands that the spirit leave him; he cannot bear to relive the pain of his past. But even more, he cannot bear the anguish of his sudden regret.

Next appears the Ghost of Christmas Present.

This ghost invites Ebenezer Scrooge to “know me better, man!”, insinuating that Ebenezer doesn’t know anything about what Christmas is really all about. To remedy this tragedy, the spirit takes Scrooge on a behind-the-scenes tour of the homes of family and friends to peek in on how others keep Christmas. First they visit a very merry home where his nephew, Fred Scrooge, and his wife and friends are feasting, singing, and playing games—all of which Scrooge was missing, having rejected Fred’s dinner invitation earlier.

Next Scrooge and the ghost visit the very humble home of his employee, Bob Crachit, where Scrooge sees all of the Crachits (and there are many) celebrating Christmas with the rare treat of a small goose and even smaller pudding cake for dessert. Scrooge is astounded that the Crachits can celebrate Christmas or even find anything to be thankful for, given their poverty. Moreover, for the first time, Scrooge learns that Crachit has a small son, Tiny Tim, who suffers from a crippling disease. He watches in amazement as, despite all of these misfortunes, the Crachits proclaim a toast of blessing upon “Mr. Scrooge!”

Afterward, despite Ebenezer’s pleas to return home, he and the ghost visit a ship at sea where poor French sailors are celebrating Christmas by singing a heartfelt rendition of “Silent Night”, and then, the next moment, Scrooge finds himself standing inside of a cold jail cell where a solitary prisoner celebrates Christmas by playing carols on a flute. Nevertheless, in the midst of it all, Scrooge cannot fathom how, without money, any of them can be happy or merry or have anything at all to celebrate. Having expressed his disbelief to the ghost, Ebenezer Scrooge abruptly finds himself alone, in the midnight of a cold and shadowy graveyard, watched from the darkness by a pair of glowing eyes.

The Ghost of Christmas Future.

This spirit does not speak but rather catapults Scrooge into a bleak future characterized by death—his own and Tiny Tim’s. Scrooge finds that while Tiny Tim’s death is mourned, his own is celebrated…

The tale of Ebenezer Scrooge is a sad one, and one many times played out in the course of history by countless characters who view Christmas simply as a means of profit and/or a waste of time. Perhaps that Ebenezer we all know is one such character.

In the end, it’s clear that Ebenezer Scrooge’s disillusionment with Christmas and with humankind in general stems back to the disappointments and losses he suffered young. As a result, he substituted money for God and the pursuit of profit for his calling. Still, he found himself more miserable than ever. But the story does not end there.

Scrooge learns his lesson—that being that there is much more to life than money and that money can even be a hindrance to real life. He finds, instead, that real joy and fulfillment come with doing the “business of mankind” and so, waking on Christmas morning (and discovering that he was not dead), Ebenezer wastes no time in making up for all the years of despising his fellow humankind; he resolves to “keep Christmas” —that spirit of charity and love and generosity—that day and all the year long.

Perhaps our Ebenezers will come to know the true meaning of Christmas which the poor, piteous Marley grieves eternally at having missed…

“’Why did I walk through crowds of fellow-beings with my eyes turned down, and never once raise them to that blessed Star which led the Wise Men to a poor abode…?’”

The greatest message we can learn from Scrooge? That it’s Christ, symbolized by that “blessed Star”, who is the one who saves us from the miserly and miserable Ebenezer inside of all of us—the only one who can save us.

But there’s one more lesson—one that is exemplified in Scrooge himself: It’s never too late to keep Christmas.

It’s never too late to change.

Merry Christmas!  May we keep it well.