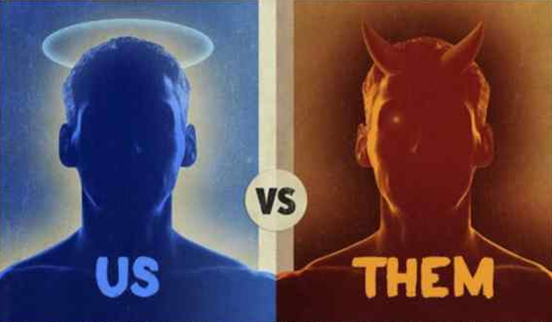 “”Nothing will be impossible for them!’”

Division is much easier to spot. Let’s face it – this country is rampant with division. We see it everywhere:

Political Division. With the presidential election looming ever closer, Republications and Democrats are literally at each other’s throats. Not surprising though. When are they not? What is surprising – and devastating to our nation – is the division within the parties. Why? Because that creates so much more division among average citizens. Of course conservatives and liberals are going to clash. It’s their job. But when we see conservatives biting each other’s heads off and democrats doing the same among themselves, then it’s past time to pay attention. However, more on that later.

Racial Division. Dare I go there? There has, unfortunately, always been racial divide – although there has been progress. I don’t think anyone can argue legitimately that race relations have not improved since MLK, Jr. But are they where they need to be? Of course not, not saying that. That being said, the racial divide in this country is only getting worse as we see cities burn in protest to racial inequalities, both real and perceived.

It’s division on a grand scale.

The burning and destruction of cities are causing inter-racial divides as well as more general racial division. And is that the goal? While some people are protesting peacefully, others are coming from outside of those communities and burning, rioting and looting the very homes and businesses of the people that they claim to be trying to help.

But let’s say protestors did only burn properties outside of inner cities – would that really solve race relations in this nation? Not a chance. Then what is the point of it? And who’s going to suffer the most if the divisions are not resolved? The very people who suffer now – only more so. The point is that racial and inter-racial violence is a graphic illustration of how division never does anything but cause more destruction and tragedy.

Economic Division. Increasingly, we’re seeing resentment and even hatred being spewed toward those who don’t “pay their fair share” in taxes. It’s generally one political party who’s criticizing the other for being “too rich”. On the other side of the divide, the “rich” (unclear where that line begins and ends) – many of whom are business owners – respond by making the claim that they did earn the money and it therefore belongs to them. The other political party is responsible for that perspective. And it doesn’t look as though that stalemate will be resolved anytime soon.

Hear me now: while I have my own opinions, who’s right or wrong on these issues is not, not, not my point in this post.

My point is that division equals destruction – every time. It’s a law – like gravity. And it’s a neutral law – it applies to those doing evil as well as to those doing good.

Success because of unity does not just happen to good people or to those with good intentions. Any group of people who is unified will achieve success – whether or not they are nice people.

It is imperative that we get this. If we do not, the United States of America is done.

If we look back through history, every victory, movement, breakthrough, or advancement that has ever been achieved has happened through the cooperation of people working together – whether the goals realized have been for good or for evil.

Unity equals success. And division equals chaos and destruction. Period. The consequences of disunity in any arena – government, places of employment, churches, schools, marriages and families – will, 100 percent of the time, result in FAILURE.

The Bible relates a story early in the history of civilization in which all people spoke a common language and so agreed (key unity word) to build a city and a “tower that reaches to the heavens”. Now God noticed this plan and, for reasons of His own, decided that the tower was not a good idea. He said, “’If as one people they have begun to do this, then nothing they plan to do will be impossible for them’” (Gen. 11:6). (I’m guessing God had some intel on what “they planned to do”.) The point? It was their unity that made “nothing impossible” for the people. Now, would God have intervened in their plans if those plans had been for good and not for evil? Knowing God, probably not – which proves the point that unity among people breeds success – even if the goals are not noble ones.

What does this mean for our nation? Simply this: we need to unify if we’re ever going to survive. We almost didn’t survive as a nation during the Civil War during which well over a half million people died (620,000 to be exact). I fear that if the United States of America wages Civil War II, millions more will die than did in the first war. And because fewer and fewer children are even being taught about the Civil War anymore, they don’t see the potential train wreck just ahead.

Am I being too dramatic? If you think so, ask yourself this: If this nation does not become unified, “One nation, under God, with justice and liberty for all”, where will we end up? Can this fighting and burning and destruction continue? Can our Constitution and the rights it guarantees survive this political disunity ? And if we can’t stop fighting among ourselves, how on earth will we ever manage to defeat any threats from the outside of the U.S.? We must consider that question as well because at this point, we’re so divided that we can’t even agree that there are any outside threats to the United States.

So what? you say. Who cares anyway?

You will. We all will. And our children will.

So what can we do? We need to care – now – care enough to unify with our neighbor, with our co-worker, with each other. We need to fight for “one nation” – not with insults and hatred and firebombs, but with our unified attitudes and words and actions. We need to remember the good that this nation has in common. And we need to do it now.

Later will be too late.