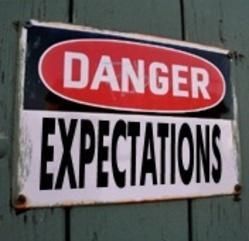 Many people think life should be fair. It isn’t. Life is hard. Hal Urban makes these points in his great book Life’s Greatest Lessons. The fact is, expecting life to be fair is a very dangerous proposition. But then – why do we have to be told this?

The reality is that even though we “know,” in general, that life isn’t fair, when it comes to us personally, we often expect it to be. And because we don’t really accept that life is not fair, then we can become angry when life slaps us upside the head and proves the point. Job loss, financial crisis, relationship problems, and health issues are some major “not fairs” in life. Eventually, when we’re angry about life’s unfairness long enough and we can’t “make” it fair (according to our standards), then we can lose hope that anything will ever change. If we go there, depression sets in.

Is it “fair” that we’re not billionaires like Cuban or Gates? Some would say a resounding “NO!” But is it fair that we weren’t born in a third-world country where mothers can’t feed their children? No. Is it fair that ever since I broke my leg when I was fourteen, I can’t bend it quite as far as I once could? I didn’t used to think so – until I saw a video of Nick Vujicic who doesn’t have any legs (or arms).

Back in the day when I had very little money, I was on a tight grocery budget. Very tight. Chicken, ground beef and pasta in some form or another were common. Then one day, my sister visited and she needed “a few” things so we went grocery shopping where she proceeded to fill her cart with all kinds of things I considered “extras” – salsa and chips, steak, baked goods, fresh fruits, et cetera. I had the usual: chicken legs, eggs, bread, milk and bologna. Once she left, I was in tears. God and I had a little “chat” during which I explained to Him (rather loudly) how “unfair” it was that she could afford steak and all I could afford was chicken. I was sick of chicken. But to this day, I still remember exactly where I was when God responded to my little tirade; I was literally mid-step between my living room and kitchen.

“Have you ever gone hungry?”

Suddenly I was in tears for another reason. “No, Lord,” I whispered, red with shame, “I haven’t.”

How unfair is that when millions of people in the world are hungry every day?

The fact is that our expectations shape our perspectives all the time. If we “expect” things to be one way or the other and they’re not, we’ll live our lives in disappointment and bitterness.

My mother died of cancer 23 years ago. My father died two years ago. However, one of the things I’ll always remember about the two of them is that they had the kind of marriage that everyone dreams of. They were best friends, treated each other with respect and never failed to show love and appreciation to the other. As a consequence, they virtually never fought; in all the years they were married, they only had two fights. So what did I expect when I got married? Exactly. I thought it was the end of the marriage if a couple had an argument; I’d just never seen it happen. Why is that important? Because since my expectations for a good marriage were so unrealistic, I was very disappointed. That meant that any “intense fellowship” my husband and I had was, to my mind, a major crisis.

Was it unfair? Or were my expectations just unrealistic? No and yes. The point is that if we have unrealistic expectations in life, then we’re going to label lots of things “unfair!”. And when we go through life thinking we’ve gotten the short end of the stick, we can become literally heart sick.

What are some of these heart-breaking expectations? How about the big media lie – that every woman should be beautiful and if we’re not, well, then we need to be “fixed”. Take Marie Osmond and her NutriSystem campaign for example. She’s 56ish (by my estimation) and looks like she’s 30. The implication is that spending big bucks for NutriSystem every month is going to make any 56-year-old look 30.

Now there’s an expectation looking for a disappointment.

I’d love to be the copywriter for that NutriSystem TV ad. The fine print would read: “Personal trainer, plastic surgeon, private cosmetologist, hair and make-up designer, wardrobe specialist, and video/photo editor are not included with this offer.”

Is it “fair” that Marie can afford to look like that and the rest of us – not so much? Personally, I don’t think it is fair, but then, I would be wrong.

The larger point is that unrealistic expectations about what’s “fair” and “unfair” can have us wasting valuable time chasing things in life that are never going to happen. When Jesus said, “’In this world you will have tribulation,’” he said it for a reason. To expect that we won’t have trials, tribulations, losses, crises, and heartaches and breaks is just plain – well, let’s say “naïve” – it sounds better.

The next time you feel disappointed, ask yourself, “What was I really expecting?” After you identify your expectations in that situation, find out from yourself whether those expectations were realistic or not. Sometimes we beat ourselves up for things that were never possible to begin with. Once we realize that, we can cut ourselves a break for not being able to achieve those impossible goals.