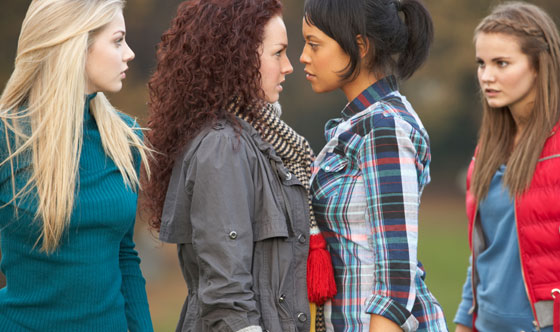 Ever heard the term “fight like a girl”? Ever seen girls fight? It’s dirty. By virtue of the fact (I guess) that ladies aren’t supposed to duke it out, we’re never taught the Marquess of Queensberry’s rules that dictate a good, clean fistfight.

That is, most girls aren’t.

Back in the day when I was being bullied by a pack of particularly vicious junior high girls, my well-meaning father taught me how to defend myself that way. Alas, but I found out the painful way that when girls fight, fists aren’t the only body parts involved. While there is lots of punching and smacking – hard – upside heads and other places, there’s also lots of leg action: kicking and tripping, which is usually followed by much rolling around on the ground. Oh, and let’s not forget the hair pulling – lots of hair pulling. And I don’t mean just a gentle tug here and there. No, this is the grab-a-handful-of-hair-and-yank-HARD kind of hair pulling. Have you ever tried to smack, kick or trip someone who has her fist wrapped around your hair? In case you have not, the fact is that that move generally dictates the location of your head. Let’s face it – whoever gets to the hair first usually wins.

Those are his Lordships’s rules for girls.

Granted, you might never encounter the infamous junior-high girls’ species (feared by wolf packs worldwide), but make no mistake: you will cross paths with a ruthless adversary in this lifetime – sometime, somewhere. It might be a battle for your dream, your destiny or even for your life, but regardless, in order to win, you had best comprehend the rules. Or lack of them.

Rule Number One: Understand the game. I was once playing Monopoly with a few friends, one of whom complained that he “never” wins the game – ever. A few minutes into the game and I began to see why. I watched as, turn after turn, he would land on a property and pass on buying.

“Why aren’t you buying any property?” I asked.

“Because saving money is good.”

What my dear friend didn’t understand is that while it’s good to save money in real life for retirement and other stuff, this wasn’t real life and there is no retirement in Monopoly. I explained to him that early in the game, his only job was to buy up as much property as he could and start building because if he didn’t, someone else would – and then he could kiss his cash good-bye. My friend was a quick learner because in no time, he had snapped up all four railroads, both utilities, and a couple of monopolies on which he proceeded to build. In the end, he owned us. Why? Because he was willing to let go of his idea of what the rules should be and play by what the rules really were.

Rule Number Two: Watch who you’re listening to. Recently I heard an interview with former heavy-weight boxing champ Joe Foreman who was asked whether he ever felt discouraged or defeated by hecklers booing and shouting. He had a rather surprising answer. He said that when he entered the ring, he blocked out every single voice around him and literally did not hear any of them. He said that it was only when the fight was over and he got back to the locker room that he would find out what others had been yelling because he had so completely tuned out. Foreman’s focus was on one thing only: winning.

The Bible gives us another good example of this principle of censoring the voices around us. At one point, Jesus heals a leper and then tells him to go to the Temple and give an offering to the priests as a testimony to his healing (Matt. 8:3). But the very first thing Jesus tells the man is, “’See that you don’t tell anyone.'” Why? Because Jesus knew that if the former-leper had stopped to chat with anyone about his healing, some skeptic or other would start telling him how lepers can’t get healed or that his healing would just wear off in the morning or some silly thing that would erode his faith.

To Jesus’ point: We need to be very careful who we’re listening to when we’re trying to do the difficult or even the impossible. Otherwise, we could well be talked out of believing that we can do what we were born to do.

Rule Number Three: Why not you?  It’s way too easy to be intimidated by the competition while pursuing whatever vision we’re working. Unless we figure out, as some people have, the secret to overcoming that paralyzing insecurity.

I remember once in college, I had a friend who had developed a crush on God’s gift to women (or so he thought). Of course, other women must have thought so too because he never lacked for girlfriends. So when my friend decided she was going to make this guy monogamous, I have to confess, I giggled. For days. But I’ll never forget what she said.

“He’s only human. He has to fall sometime. It may as well be for me.”

The fascinating thing was – she was right and he did.

So why not you? Someone has to get that job or record deal or scholarship or agent or client. So instead of thinking about all the reasons why it shouldn’t be you, begin to focus on all the reasons why you should be the chosen. On the way there, it helps to remember one thing: Everybody was nobody before they were somebody. That might be a cliché but that’s only because it’s an indisputable truth. How did those somebodies get on the map? By believing that they were the possibility.

The bottom line is that we all have to contend for what we believe in – our dreams, our visions, our destinies. And someday, somewhere, someone in your game will be the one to beat the odds and win the prize. Why not you? Fight for it. Fight for it like you mean it.