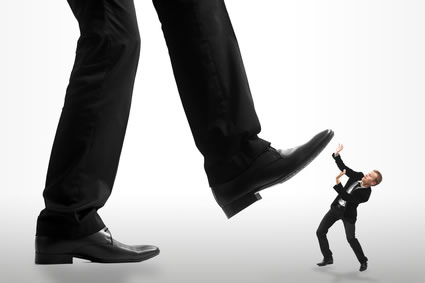 GIANTS IN THE LAND

Throughout history, there’ve been some people who have, as they say, “beat the odds”. History is full of them, as is the Bible—even Cinderella overcame the impossible. And whatever you think of Donald Trump, you have to admit that he beat the odds as well—very long odds—to become President of the United States. When he entered the presidential race, there were 18 other people running for the Republican nomination, including powerful political “giants” like Jeb Bush, Chris Christy, Ted Cruz, John Kasich, Marco Rubio and a bunch of other people whose names I can’t remember. At the same time that that circus was brewing, Hillary Clinton—fueled by the whole Washington political establishment (not to mention hundreds of millions of dollars)—symbolized a giant in her own right; even should Trump become the Republican candidate for president, he’d still have to face down the powerful Clinton machine. The odds were very much against him winning even the Republican nom much less the election.

Rewind a few thousand years and you have the same story with David and Goliath. David was a little shrimp of a nobody suffering from delusions of grandeur. After all, he had the unmitigated gall to think that he could possibly be any match for the heavy weight champion of the Philistines, the renowned Nephilim giant called Goliath. David had no military training, no armor, and no support—even his own brothers thought he was an egotistical little snot. Still, he had a slingshot. And he had defeated a bear. Oh—and a lion.

And then there’s fast-food giant Chik-fil-A… Of course, it didn’t start out as one of the most successful food chains in history. In 1946, Founder S. Truett Cathy founded the business when he and his brother opened an Atlanta diner known as “The Dwarf Grill”. (Does anyone else see the irony in that?) Chik-fil-A—from dwarf to giant—just like Donald Trump, catapulted from political non-entity to POTUS, and David, from an unknown shepherd boy to the most famous king Israel has ever known. Yet despite all of the adversity that has come against President Trump, King David, and S. Truett Cathy (for closing on Sundays to give employees time to attend church), they have not been defeated. To the contrary, they’ve been victorious on a scale unprecedented.

How is that even possible??

There’s only one reason: When faced with the giants of their times and industries, they did not speak fear, back up or run away; they continued on the path they believed they had been called to and no “giants” were going to stop them.

On the flip side, we have the account of the twelve men assigned by Moses to go into the Promised Land and spy it out so that the wandering Israelites could finally move from the desert into the land that God had promised them—a land “flowing with milk and honey”.

If you don’t know the story, Moses sent twelve men into the land of Canaan, instructing them to get intel on the strength and numbers of the people living there, their cities, and the land and crops. The men returned (carrying grapes so huge that it took two of them to carry one cluster on a pole) and they gave Moses their report:

“‘We went in to the land where you sent us; and it certainly does flow with milk and honey, and this is its fruit. Nevertheless, the people who live in the land are strong, and the walled cities are fortified and very large; and moreover, we saw the descendants of Anak there… We are not able to go up against the people, for they are too strong for us… all the people whom we saw are men of great size. There also we saw the Nephilim [giants]; and we became like grasshoppers in our own sight, and so we were in their sight’” (Num. 13:27-33).

Except for Joshua and Caleb, the men were intimidated by the challenges presented by the Promised Land: the walled cities and the giants. Because of their fear and consequent reluctance to move into that land, God banned them from going in—except for Joshua and Caleb—who believed God and were therefore willing to take on the walled cities and the giants.

How many of us have a dream, a destiny, that we know we’re called to pursue—and yet, we don’t? We’re too afraid of the walls in front of us and the giants surrounding us.

“Walls” represent obstacles to our dreams, those things which deter us and keep us apart from our goals. The Israelites faced them—the “fortified” walls, strong walls, keeping them from achieving their God-ordained goal of conquering those cities and those tribes. Ten of the twelve spies ran from the walled cities but two did not; those two, Joshua and Caleb, were allowed to enter the Promised Land after all of the others had died. However, when they did, God had a rather unusual plan for tearing down those walls; when the time came to conquer Jericho, the Israelites marched around the walled city, shouting and declaring the word of the Lord. It was an unconventional plan, but because it was God’s plan, it worked. The Israelites conquered the city that day.

As for the “giants” in our lives, they represent the competition that we often face when we venture out to break into some new industry or business or to achieve some prized goal which thousands of talented others are also vying to win. Think about competing for a job or a business deal or a spot on the sports’ roster or a publishing contract. Or think about breaking into an industry with a new business among others already long-established in the market share or founding a ministry that others judge you unqualified for.

The competition—the giants—can make us tremble and flee.

But—the “lions” and “bears” represent all that God has led us through in the past: victories in the face of impossible odds. David vs. Goliath. Trump vs. Clinton. Cathy’s Chik-fil-A vs. McDonald’s (and Kentucky Fried Chicken and Pizza Hut, and Taco Bell)—these are all examples of those who refused to look at the strength or height of the giants or the walls; instead, they kept focused on the goal. Moreover, they looked back at what they had already accomplished, knowing that God had used all of the “lions” and “bears” of their past to prepare them for the challenges of the future.

It’s the same with you and me: In pursuit of our dreams and destinies, we’ve all faced terrible giants and fortified walls—and we will again. The only difference will be whether we stand and face them or we turn and flee.

To strengthen our faith and resolve, we need to focus on the fact that if God never backed his people in the midst of impossible odds, he’d never get anything done through us. And he loves to work through his people.

Keep that in mind the next time a ten-story wall looms in front of you or a Goliath rears up in your face.

Remember the lions and bears.