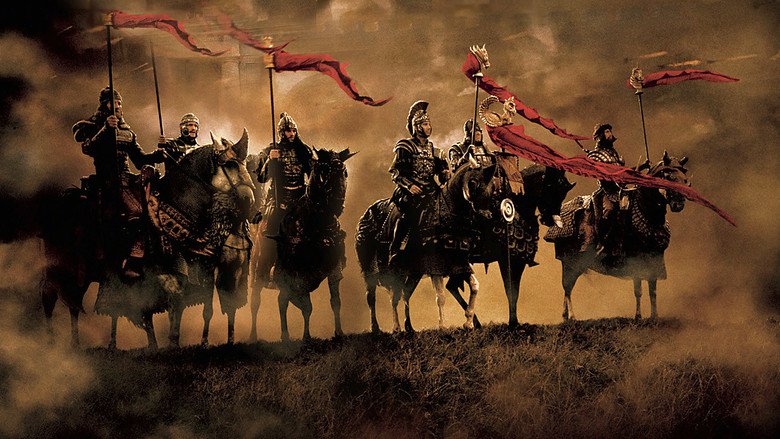 You’ve probably not given it much thought lately, but a warhorse is an amazing thing. They’re not just what the warrior rides on – they are the warrior. They have, of course, strength, they have incredible instincts, and they are fearless. Why am I rambling on about warhorses? Because they weren’t born that way.

I’m reminded of a scene in the best rendition of the King Arthur legend that I’ve ever seen called, not surprisingly, King Arthur (starring Clive Owen and Kiera Knightley). In a nutshell, Arthur is a Roman commander and all of his knights, before they were knights, were Sarmation boys who were forced into 15 years of brutal servitude in the Roman army. Essentially, because the Sarmations were known to be valiant warriors, the boys are taken from their homes and become slaves.

Nevertheless, they come to love Arthur because, unlike other Romans, he believes all men were born free “from their first breath”. These men fight alongside Arthur for 15 years until the day comes when they’ve all earned their freedom; they have the papers and everything. The problem is that the Saxons are invading Britain from the north and the Saxons are evil. Everything and everyone they don’t murder, they burn. However, now that his knights are free, Arthur will not order them to fight the Saxons. They ride off to return to their homes, taking the townspeople to escape with them, and Arthur rides off to face the Saxons alone (with a little help from Merlin’s druids but how much good will that do?). But as the knights are riding merrily away from the battle, the sound of the Saxons’ war drums can be heard in the far distance. The Saxons are coming closer. Nevertheless, the knights ignore them and keep riding south.

Except that their warhorses don’t.

Their warhorses hear the sound of the drums in the distance and begin to fight their riders to turn around. The knights have a hard time reining them in as the horses are pawing and snorting and trying to gallop away. The horses are fearless.

They hear the sound of the battle and they want to run to it.

Horses don’t become warhorses the moment some warrior throws a saddle on them and rides off into battle; warhorses, like the warriors themselves, are trained. They’re taught to run to the battle and through the thick of it, never slowing down. They’re taught commands, battle maneuvers, and defensive strategies. They’re trained in battle skirmishes so that they get used to the sounds, sights and smells of the battle. And they’re taught to keep on fighting – even when they’re wounded.

Warhorses begin as wild horses – whether they’re captured in the wild or born in a stall. And yet it’s that wild spirit that’s not broken but honed, trained and refined. The warhorse learns who its master is and, when submitted to the master, then becomes a partner with him and the two accomplish more together than either one could ever do alone. Submission to the training of its master does not beat the horse into a wimpy little nag; rather it makes the horse into a warhorse – more fearless, powerful and magnificent than it could ever hope to be in the wild.

You and I are like those wild horses. We may have some skills on our own, but submitted to the Master, we can become more than we’d ever have dreamed – fearless, powerful and valuable resources in the war for the Kingdom on earth.

There’s a reason Jesus will ride to victory in the final battle on a warhorse instead of in an F-22 fighter jet or an Apache helicopter. A warhorse is His partner, it fights with Him and for Him. And a warhorse never runs.

If we listen, we can hear the sound of the war drums. Are you ready?

Previous post
Spiritual Warfare vs. Your Destiny – Part II
Next post
When the Dream Is Not Behaving