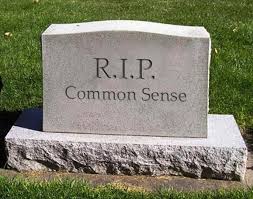 Whatever happened to Common Sense?  Unfortunately, it’s not so common anymore. While Common Sense used to be everywhere – courtrooms, Congress, cable, and classic movies and literature – now not so much. Common Sense is rarely found these days in newspapers, judicial decisions, social policies or any kind of pop culture. And forget classrooms.

In fact, Common Sense is well on his way to becoming extinct. Instead, he’s being replaced by his six other brothers.

Let me introduce them to you.

The oldest brother is Get Some Sense. He’s big on education and thinks that the more degrees he gets, the more wisdom he’ll have. As a result, he’s up to his neck in PhD’s, MA’s and MS’s, MD’s, and whatever other alphabets he can buy. Unfortunately, while he’s smart enough to know that a tomato is a fruit and not a vegetable, he’s not smart enough to know it doesn’t belong in his fruit salad. Furthermore, in his vast acquisition of knowledge, Get Some Sense has deemed social promotion, entitlement and self-esteem more important than hard work; government regulations more important than parental authority; and “political correctness” more important than, well – common sense.

Then we have Common Sense’s next brother, N.O. Sense. (N.O. stands for “No Originality”.) NO Sense is, basically, a follower. Whatever’s popular or the current trend or whatever the crowd is doing, NO Sense will be found doing, too. Needless to say, he has very few independent thinking skills and even less interest in developing any. He’s the soul of every sort of mob mentality from bullying to violent protests to drug use and crime. Tragically, he’s never been known to be the source of any good deed.

Next is Not-A-Lotta Sense. (He’s a twin.)  Not surprisingly, Not-A-Lotta has not been very successful in life. He’s not very open to listening to advice; in fact, he’s a do-it-yourselfer. He has to find out everything for himself. The hard way. Like the time he bought that fruity computer stock (something to do with apples) from some guy out of his garage and Uncle Milt told him to hold onto it. But he didn’t. He needed beer money. Sometimes Not-A-Lotta Sense is a slow learner.

Not-A-Lotta’s twin bro is Lacking Sense. “S-Lacker,” as he’s known, has the ability to think for himself; he just doesn’t. He tends to rush into actions and decisions with not much forethought. He’s often late to work (when he’s working), drives too fast (license optional), and spends money like water (picture the faucet left running).  He is, however, really good at video games.

And then there’s Dollars and Sense. Dollars believes everything is about money. The only two questions he ever asks when making any decisions are, “How much will it make me?” and “How much will it cost me?”  For example, since vacations generally cost money rather than make it, he’s never taken one. He did fly to Aruba once but that was just to deposit money into a “non-existent” bank account. (The rest he keeps under his mattress.) Dollars is also a big fan of insider trading. But you didn’t hear that from me.

And finally, there’s the last brother, Non Sense, who’s been around, it seems, since the beginning of time. However, it actually hasn’t been that long. Non Sense really came into his own in the late 60’s and particularly made a name for himself at a place called Woodstock. Since then, he’s been spotted in various places including Hollywood, Washington DC, and in most universities around the world. Non Sense babbles frequently on talk shows, “news” networks, and U-Tube. Social media is also a favorite hang-out. If Non Sense friend-requests you, I don’t recommend you go there.

So – since his six other brothers have taken over, Common Sense has become rather rare. He’s found in few places these days: old books which no one any longer reads, the minds and hearts of the “Greatest Generation” (aka – “obsolete” by later generations), and in original, unabridged copies of sacred documents like the U.S. Constitution and the Holy Bible. Common Sense has become so endangered that I now suppose he’s better known as – Uncommon Sense.

I will miss him.