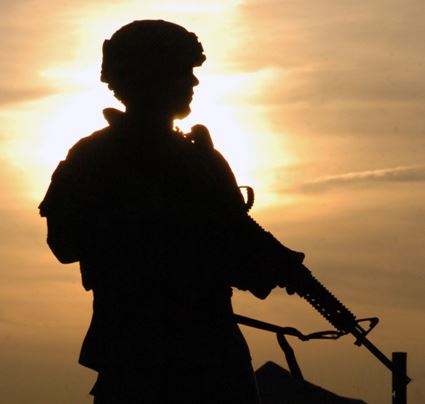 One dark and solitary night fifty years ago at a remote Air Force base in Viet Nam, a soldier standing guard at a gate decided that, since it was such a quiet night, he could postpone the call of duty momentarily and answer the call of nature—he’d only be gone five minutes, if that. It was, after all, 3 am, the base was miles from anywhere, and Charlie hadn’t been spotted in two whole days. What he didn’t know was that Viet Cong troops were lurking nearby, just waiting for their chance to gain access to the military base. Fifteen minutes later, security had been breached, several aircraft blown to bits, and three airmen killed. And why?

Because the soldier had let down his guard.

The response most people have to that story is some version of “A soldier never leaves his post, under any circumstances—he should be court-martialed!”

He was, but that’s not the point. The point is that most people commenting on that sad tale will swear on their paychecks that if they had been that soldier, they would have never let down their guard.

And yet they do.

The Apostle Paul, in his advice to his young protégé Timothy, warns him to guard closely what had been entrusted to his care (I Tim. 6:20).  Now many people (not us, of course) read that warning and discount it because Timothy was, after all, a pastor, and that stuff only applies to them.

But not so fast. Granted, Timothy was a pastor and had much to guard, but when you break it down, much of what he was entrusted with is not so different than what we, ourselves, are responsible for. Timothy had a congregation, but we have people, too—spouses, children, parents, employees, students or even co-workers in one capacity or another. Peter warns leaders to “care for the flock that God has entrusted to you” (I Peter 5:2).  Of course, this admonition applies to all who are responsible for others. In fact, Jesus told His disciples (us) that we are even responsible for our “neighbors” —that being our fellow human beings.

Paul also warns Timothy to guard against some things, “youthful lust” being one of them (II Tim. 2:22), and Paul warns all of us “not to think more highly of [ourselves] than [we] ought” (Romans 12:3). In other words, we need to guard against lust and pride. In fact, we should guard against anything that threatens our integrity and reputation.

Another part of Paul’s warning to Timothy is to “carefully guard the precious truth that has been entrusted to you” (II Tim. 1:14), and to beware of men who deceive and pollute the purity of the Gospel. And while we aren’t necessarily responsible for what’s taught from the pulpit in our churches, what about guarding ourselves and our children from deception—from the insidious infiltration of the occult into our culture? “Innocent” games like Ouija boards and séances, “harmless” little excursions to the fortune teller at the carnival, or amusing little forays into the horoscope section of the newspaper? What about the crossbreeding of religions—a New Age dash of Zen Buddhism here, a refreshing mantra-laced Hindu meditation there, with a little Christian spice on top? (Except not the “Jesus is the only way” part because that is so closed-minded!)

What about guarding against that?

And what about the money that’s been entrusted to us? Cash or credit card? Save or splurge? Charitable causes or vacation? Hoard or share?  Jesus had a little bit to say in that regard: “‘Beware! Guard against every kind of greed…’” (Luke 12:15).

And then there’s the heart. The Bible speaks in Proverbs about guarding our hearts—and that means not just who we fall in love with but rather what we open our hearts to. “Guard your heart above all else, for it determines the course of your life” (4:23). So— do we indulge in a perfectly-justified morsel of offense and/or unforgiveness when someone angers or hurts us? Or do we simply ignore the warnings and thereby allow those evils to take root and blossom into bitterness? And not just bitterness: “‘For from within, out of a person’s heart, come evil thoughts, sexual immorality, theft, murder, adultery, greed, wickedness, deceit, lustful desires, envy, slander, pride, and foolishness’” (Mark 7:21-22).

If we don’t guard what we allow into our hearts, we’ll eventually have no control over the evil that comes from them.

Do we guard our hearts?

Finally, do we guard the most important treasure we have—our relationship with the Lord? Do we guard our time with Him? Granted, that’s not always easy, and I’m not in any position to imply that it is—but do we try? Do we go places with Him? Or are we always out with the guys, the girls, the kids? Do we read His book or watch our movie? Sunday morning worship or NFL pre-game tailgate party? (or brunch or soccer game or bubble bath?) And who has the final say in our decisions—the Lord or our Facebook friends?

Is He in charge of our destiny or are we?

Some not-too-distant day we’ll stand before the Lord to give an account for all that we’ve been assigned to do. And on that day, regardless of what we claim right now, we’ll only want to hear Jesus say one thing: “‘Well done, good and faithful servant. You have been faithful with what I’ve entrusted to you’” (Luke 19:17).

We talk a lot about having trust in God, but the unfathomable fact is that He’s trusting us to fulfill the assignment He’s given us. But that will only happen one way.

You have a destiny. Guard it well.