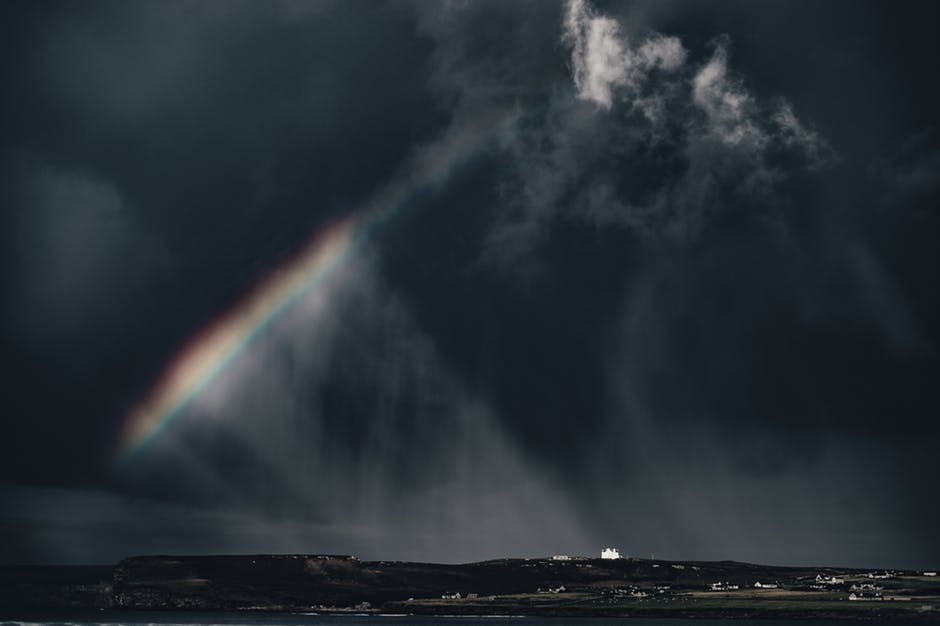 Recently I sat on my deck with a cup of tea, staring up at the heaping purple clouds rolling in from the western skies, waiting on the rain. And that’s when it occurred to me that that would make a great song: “Waitin’ On the Rain”. Of course, it would have to be a blues tune, the desperate purge of some splintering soul mourning with slow, heart-wrenching, Muddy-Waters tears as hope, a final and dying note, withered slowly into silence. Waiting on the rain – the next inevitable disappointment, the next searing heartbreak, the next paralyzing regret – and the next and the next and the next . . .

How we see the rain depends on our perspectives and our expectations. But mostly, it depends on what we believe.

Do we believe, in spite of the devastating rains that will drench every life sometime, somewhere that God is ultimately in charge, that the clouds will eventually part and the sun will appear again? Or do we instead believe that the rain, even sustained though it might sometimes be, is the Great Flood of our lives, destroying all hopes, ship-wrecking all dreams; that rain – the final word in our destinies?

There once was a man who experienced more rain in his life than most other people in history. You may have heard of him but in case you have not, know that few people have ever been defeated more times in life than he was and yet he never quit. His life went something like this:

You know this man as President Abraham Lincoln. He was, arguably, the most important president this nation has ever known because, if not for him, who knows how much longer this nation would have endured slavery? But because he was willing to stand for what he believed in, even to the point of going to war and being among the most hated men of his time, slavery ended. Would he have had the courage to face those hurricanes (they were so much more than “rain”) had he not chosen to endure and endure and endure in the midst of his own life’s hurricanes? I doubt it. If he learned one thing it was this: Quitting is not an option.

There was another man who experienced rain in his life. It wasn’t easy; he tried and failed over and over again at one thing or another. He got a job as a retail manager but wasn’t great at sales and so got fired. Afterward, he found a job in construction but was laid off and had trouble finding another job because he didn’t have great references from the first job. In the meantime, his wife left him because she didn’t think he was working hard enough at finding employment or to repay their debt. Once she disappeared, he worked a little harder at finding a job and finally landed another in construction. That went pretty well and he was on the brink of getting back together with his wife when he was injured on the job; he busted out his knee. And even though Worker’s Comp paid for his knee surgery, he was in a great deal of pain and – you guessed it – ended up addicted to pain killers. At that point, his wife divorced him. Still, he did go to rehab for his addiction. His name was Marcus Brutus Brandonberg. Recognize that name? No? That’s because he stopped going to rehab. He stopped believing.

Ever heard of a self-fulfilling prophecy? It’s a concept that says that what we believe deep in our hearts will, ultimately and absolutely, determine what we get. And there’s nothing spooky or flaky or New Age-y about it because what we believe will eventually determine that most critical of factors: whether we persevere or whether we quit.

If we believe the rain is an inevitable, all-powerful and ultimately destructive force in our lives over which we have no control, then we may as well quit. What would be the point of pushing through the pain? But if we recognize that there is a rain, a sweet rain of blessing which leads to honor and victory and destiny, then we won’t give up – in spite of the heartache and disappointment and pain. Rain can cause all of those things but one thing it cannot cause is defeat. Only we can do that.

What do you see when you’re waiting on the rain?