Spiritual Warfare vs. Your Destiny 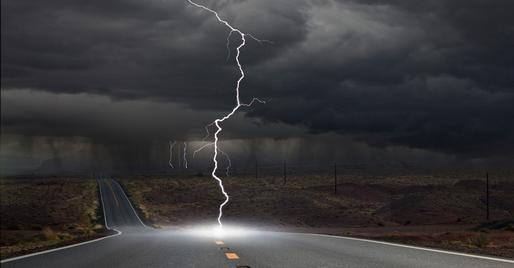 We all know it’s going to happen. You’re moving along, living your life, working the dream, minding your own business, and—bam! you get hit. It’s a huge financial setback or a relationship crisis or an illness/injury/disease or a job loss or the car goes or, in some cases, it’s a combo package.

And lots of times we have the same reaction: “Oh, well—I must be doing something right.” Probably. But without a more, shall we say, involved response, you may not be doing that something much longer.

I write on spiritual warfare when I’m not doing this. (This is fun; I call it my playground.) But sometimes, the research and the writing can get a little dark and the heat a little hot. Case in point: the last couple of weeks.

It all started within the last seven days when I received a breakthrough from the Lord concerning a book I’ve been working on for a while. Problem was that I’d hit a wall with some plot components and just could not figure some things out. At any rate, like I said—breakthrough this past week. I sat in awe as the Lord sorted out one thing after another until all of the pieces were in place.

First, my electric stove just up and started shocking us when we would touch it and it didn’t even have to be on. One of my sons got a couple of serious shocks. It turned out that the stove’s ground wire had become disconnected. All by itself. For no apparent reason. Thankfully, a friend came over and reconnected it and we could cook again. All was well.

Until my phone went. Well, we could still cook, but I had to buy a new phone. And while I got a deal, it still cost some bucks—300 of them. But it would’ve happened eventually. I guess…

Then on Saturday, my pool motor and pump sprang a leak so off to the pool store I went and bought the part they said I needed. They were wrong, but that’s beside the point. (Or maybe that is the point…) So we started taking the pump apart, but it just wouldn’t come apart—at all, no matter what. Long story short, back to the pool store to pick up—rather, buy—a new motor and pump. More dollars.

Now, while I’m there, I thought I’d pick up some chlorine for the pool. Smart, right? Kill two birds, etc.  Except that the guy who put the massively heavy jug of chlorine in the back of my car didn’t put the lid on tight enough. You guessed it: when I got home, I found that a good portion of the black carpeting in my trunk was now white. And did you know that breathing in chlorine can make you sick? I do. Now.

Speaking of the car, it’s red. Except for the parts where the asphalt and tar from some brand new road decided to stick to it. And I don’t just mean some spatter; the car is now red and black.

Then yesterday, after we got the pool pump installed and the chlorine mopped up (sort of) and I bought the tar cleaning stuff, I decided to relax and write. So I got on the computer and after a few minutes, got the “plug in or die” message. But when I plugged in, nothing happened; it wouldn’t turn on. Did it crash?? Did it overheat?? Did it go on vacation?? So, after a trip to the computer store (in the red and black, chlorine-smelling car) and forty-plus dollars later, I am the proud owner of a new computer charger.

So—what can be done about the attacks that will come? Basically, we have three choices: we can fight them, we can ignore them, or we can run.

Two of those strategies won’t work. The fact is, the spiritual war is raging all around you but, in Christ, you’ve already won.

The enemy just hopes you don’t know that.

Previous post
The “Insignificant” Days of Your Destiny
Next post
Spiritual Warfare vs. Your Destiny – Part II