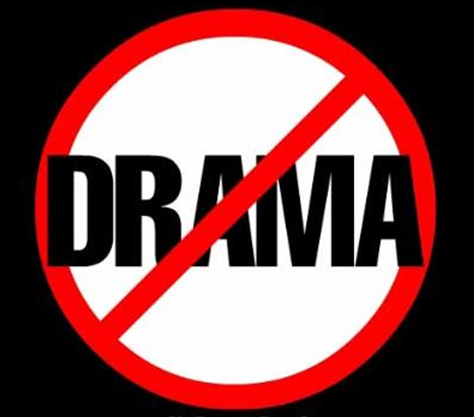 Have you ever noticed that “drama” rhymes with “trauma”? Well it does. And is it possible to indulge in a little drama without creating trauma – for someone? Probably not. But there are people who simply can’t seem to function without a little drama fix somewhere, sometime, somehow during their day. And it just wouldn’t be half as much fun for them if they weren’t able to pull you into it. So – you have to ask yourself: “Am I being shipwrecked by someone else’s antics or – just as importantly – are my goals and visions?”

The truth is that in order to be harmed by someone else’s drama, trauma, crisis-du-jour, atomic meltdown, and/or apocalypse, you have to be sucked into some type of emotional manipulation – and that doesn’t happen by accident. Most continuous drama exhibitions are by design, at the very least to get attention and to the extreme, to exhort some sort of payment from the victim of the drama. As in, “If I don’t get ‘my way’ (whatever that might mean), I’m going to die!”

The unspoken message: “And it’ll be your fault!”

Listen – we’re all victims of giving in to drama once in a while and if the truth be told, we might even be the perpetrators of a little action of our own now and then (mostly “then”). Drama can range from a pouting lower lip or a few tears on the sly to a full-blown emotional or physical assault. But if the “drama” that we’re being subjected to is too regular, abusive or both, then there’s a much bigger problem afoot. That much trauma could actually mean one of two things is happening: either the drama entity has zeroed in on an “enabler” or, if their distress is real, then that entity is in much more need of mental help then we can possibly give. There are several reasons for drama…

Sometimes, due to insecurities of their own, people simply need to be the center of attention. Depending on what kind of attention they need, this might be your problem or not. If the demand is simply an annoyance, give them their cookie and move on. If the demand for attention hinders or threatens your own ability to function, it obviously has to be dealt with. Parents, pastors, teachers, employers all have to deal with folks in various degrees of the “I-need-attention-and-I-need-it-now” syndrome. Funny thing about attention-needy folks, though – their drama tends to vaporize when their audience vanishes.

Much drama can ensue when people discover their lack of ability in some area or another – and especially when others discover it for them. This drama generally manifests in terms of error cover-ups which might include excuse-making, lying, defensive outbursts of anger, and/or meltdowns involving lots of tears and sobbing. If people are blessing you with these types of behaviors, it’s probably because they have to answer to you as their employer or coach or teacher or in some other capacity in which you’re in authority over them. What happens to them in these circumstances depends on them. If they’re at all interested in improving their skills so that the drama stops, then invest. If not, a little tough love might be in order. Or a pink slip.

People exhibiting “desperate drama” behaviors might actually pose a threat to themselves and/or others. It might not even be too dramatic to say that “threatening” might be too innocuous a word; perhaps “dangerous” might be a better description. People who are desperate are generally feeling as though they have no control over a relationship or situation and are therefore desperate to get that control. And while “drama” might describe this person’s behavior, the actual danger they pose could well be more serious: they could endanger themselves – in order to control you. On the other hand, you could be the target of rage, possessiveness, or some type of payback for not caving to desperate-drama manipulation: financial ruin, damage to one’s reputation, even stalking could be extreme examples of someone seeking control of a situation. These folks need a reality check and chances are, if you’re the target, you should not probably be the one to provide it. At this point, your local law enforcement officer might be a really wise option. So would an Order of Protection.

Drama is never fun and can be a bit of a detriment to one’s life, liberty and pursuit of happiness. Moreover, someone else’s drama exhibitions can damage or even completely shipwreck your own goals, dreams and visions if you get caught up in their nonsense. That’s not to say, of course, that you should not try to help others who need it but – you know the difference between drama and the real thing. The main difference is that real trauma almost always has a resolution. Drama-trauma never does.

Know a drama queen or other royal entity? It’s time to banish them from Court.